History
In 2008, Rough House’s debut production Tiny Apocalypse was a one-woman show that scrutinized the surreal banalities and submerged hysteria of office life in a world shaped and monitored by surveillance. It premiered at Rumble’s Tremors Festival where it was awarded a Jessie Richardson theatre award for Outstanding Lighting Design as well as being nominated for  Outstanding Production, Direction, Performance, Sound Design and Significant Achievement In Video Design.

In 2010, Smile! You’re on Camera investigated issues of police harassment and state surveillance in collaboration with 33-at-risk youth participants from Leave Out Violence (LOVE) BC. It was produced in partnership with Neworld Theatre and LOVE BC and presented as a 6-hour durational performance at Car Free Day on Main Street (2010)

In 2012, A Last Resort experimented with the form of the travelogue to engage in an intimate biographical conversation about displacement and migration. Produced in partnership with Rumble and Shadbolt Centre, A Last Resort was presented at Free Fall Festival, Toronto; Tremors Festival, Vancouver; Shadbolt Centre, Burnaby; and was nominated for a Jessie Richardson award for Outstanding Original Script.

In 2016, for Three Lectures on The North, Theatre Replacement and Rough House Productions, commissioned three speeches on the subject of Canada’s North. Words were woven together and partnered with instructions for how they should have been delivered. It was presented at the Shadbolt Centre for the Art and featured the writing of Marie Clements, Clare Duffy and James Long. 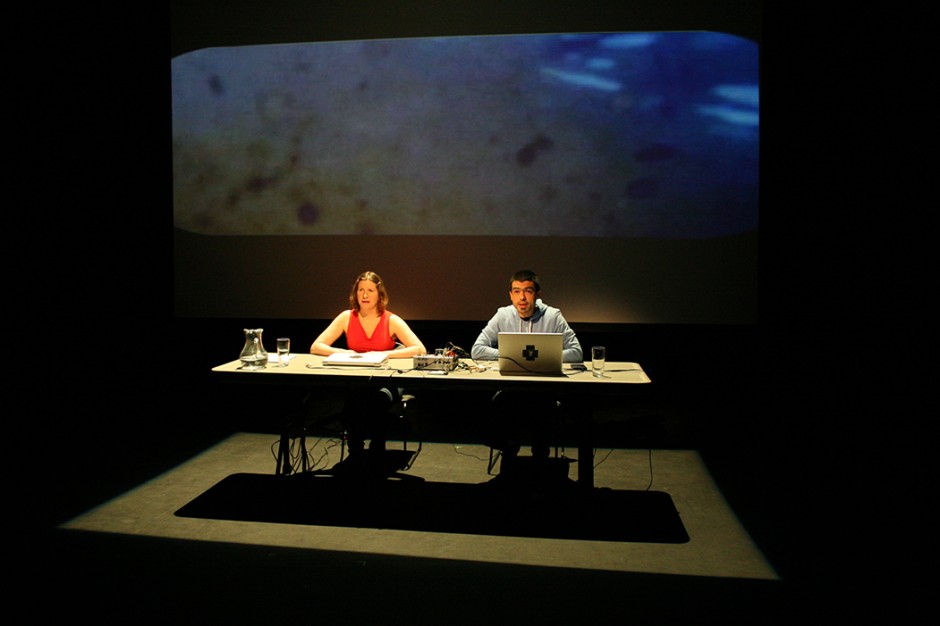 ARTISTIC DIRECTORS
Born and raised in México, Candelario Andrade has designed multimedia for theatre, music and dance performances in México and Vancouver. Now based in Vancouver, BC, Cande has designed for companies such as Horseshoes and Hand Grenades, Theatre Replacement, Electric Company, Neworld, Rumble Productions, Leaky Heaven, Conspiracy Theatre, Boca del Lupo, Real Wheels, Urban Ink, Headlines Theatre and Pi Theatre. In 2010, he collaborated with Berlin-based company Rimini Protokoll for whom he did the video design for Best Before, which premiered at PuSh Festival and toured internationally. For Rough House, Cande did video design for Tiny Apocalypse, was a multimedia artist facilitator for Smile! You’re On Camera and co-created and designed A Last Resort. Currently he is an independent promo producer at Knowledge Network.

Born in Venezuela, Camille Gingras grew up in Argentina, Scotland and Canada before living in England for twelve years. She holds a BA (Hons) in English Literature and Theatre at Kent University, studied at Desmond Jones’ School of Mime and Physical Theatre,  and received an MA (Distinction) in Playwriting at Birmingham University. In Canada, Camille has devised new performances with some of BC’s most adventurous companies. Selected credits include: Leaky Heaven’s To Wear A Heart So White; The Chop’s Kismet one to one hundred; Boca Del Lupo The Suicide, (Recipient of the Alcan award); Theatre Replacement and Rumble Productions’ Clark and I Somewhere in Connecticut, which premiered at PuSh and was awarded the Vancouver Critics’ Innovation award. For Rough House, Camille conceived and created Tiny Apocalypse; she was lead artistic facilitator for Smile! You’re on Camera; and co-created A Last Resort with Candelario Andrade.